Just one of what I am sure will be many feel-good stories from a time when we are staying at home or at least close to home.

My neighbour, Sue (an AUSOM member) was returning home from a medical appointment and saw a large dark colours bird struggling on or near the road. Nobody likes to see an animal in distress more than this kind-hearted lady. The bird appeared to be trying to lift one leg with his beak and looked unable to fly. Sue stopped at our home. Could we lend a towel and cardboard box?

Armed with 2 towels, a cardboard box and gardening gloves I went back with her. Eventually we located the bird that had struggled about 12 metres to the other side of the road. When we approached it fortunately moved under a small bush. Sue wrapped it in one of the towels. It hardly struggled but did have a few ‘words’ to say.

I sat in the car and was handed the bird, which by this time seemed content. There was no more discussion from it during the car ride to The Blackburn Vet. With me stroking his head and looking into a bright almost orange eye. 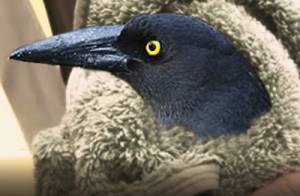 Sue gave him into the safe hands of a vet nurse who took details about where and when we had found him. Within a very short time the phone rang saying the bird was fine. It had twine caught around one leg and around its neck, which the vet was able to remove. They would return the bird to where it was found as soon as they could find someone to do that.

Sue agreed to drive back later in the afternoon and pick up the bird. It was getting dark when she opened the dog carrier she had him in and found him asleep and obviously quite content with his treatment for the day.

A small nudge and he opened his eyes, realised he could get away and fly up into a tree. 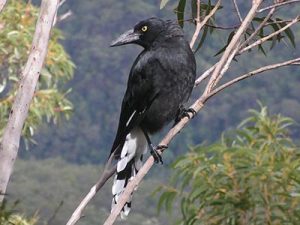 Imagine the delight of another neighbour when she saw him fly free. She had seen the bird earlier that morning and could not obtain assistance but was fortunate to walk down her drive just as Sue released the Currawong to add his beautiful song to the other bird calls once more.

Do you have any stories from your time ‘Staying at Home’? Please submit them to AUSOM’s Creativity Challenge – see: https://ausom.net.au/creativitychallenge/

One thought on “Let us fly free”

Our last main meeting for 2022 features all your favourite SIGs, News@Noon and all without leaving the comfort of your own home!

Mon 12 December 2022
Members' Christmas Get Together

Members’ Christmas Get Together 12 noon.
The presentation is about “Improving your iPhone Photos” with Heather Close.
Register at above link.

Wed 14 December 2022
AUSOM Retirees and Others

This will be a Hybrid meeting so come along to the venue or join online from home.

Join us at 12:30pm for lunch in Mornington Park, Flinders Dr, Mornington

Find us with this link: https://w3w.co/intense.jacuzzi.ornaments