Staying at home has meant that many people have found new interests. Often as a result of following links on the Internet. 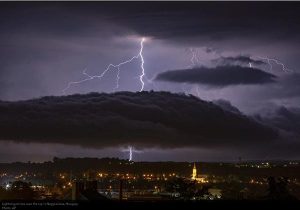 Lightning has the effect of enthralling or terrifying us. This bolt appears to be striking right through a cloud. It is the result of parallax or depth of field but a great photo never the less. It is well known that a lightning strike actually strikes down to and up from the ground as a result of a varying potential difference that occurs Between the cloud and the earth.

Strokes of lightning flashing down towards the ground are a familiar sight during summer thunderstorms, but scientists have captured an image of a rare lightning bolt shooting out upwards from a cloud, almost to the edge of the Earth’s atmosphere.

These bolts of upwards lightning, one type among a variety of electrical discharges now known to occur above thunderstorms, are called gigantic jets and were only first discovered in 2001.

Since then, only about 10 gigantic jets have been observed, said Steven Cummer, who was part of the team that photographed this most recent jet. Gigantic jets are essentially the same as cloud-to-ground lightning, only they go the opposite way.

While you are staying at home why not share some of the topics you have discovered? Leave a comment below with information of your newly discovered interest.

Mon 12 December 2022
Members' Christmas Get Together

Members’ Christmas Get Together 12 noon.
The presentation is about “Improving your iPhone Photos” with Heather Close.
Register at above link.

Wed 14 December 2022
AUSOM Retirees and Others

This will be a Hybrid meeting so come along to the venue or join online from home.

Join us at 12:30pm for lunch in Mornington Park, Flinders Dr, Mornington

Find us with this link: https://w3w.co/intense.jacuzzi.ornaments